Bee Removal – Let Us Help You with Your Bee Swarm Removal 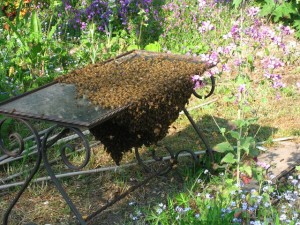 WE ARE NO LONGER DOING BEE SWARM REMOVALS FOR THE 2019 SEASON!

Queen Bri’s Honey is happy to do bee removal for any bee swarms that you might find in the Oklahoma City and surrounding areas.

Local bee swarms will be relocated to one of our bee apiaries where they will receive a brand new hive and food to supplement them until they can collect enough pollen and nectar to survive unassisted.

Some bee removals are close enough to us and easy enough to get that we can remove them for FREE. Other bee removals will require a charge to remove them if they are inside a structure or if you are a long way from our location. It really just depends, so give us a call, and we might be able to get them off your hands for FREE.

Why do we charge for some bee removal services? 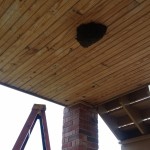 Our time is very valuable, and it takes time to travel to bee removal sites and remove the bees, and time to set them up in their new hive box back at our apiary. It also costs gas money. Sometimes, the bees are very aggressive, and our beekeepers will be stung many times during the removal process. Bee removals are both a dangerous and physically demanding service. Some bee removals can take hours to complete, even as many as 12 hours if we are having to cut away walls and scrub them down after the bees are removed so that no traces of wax or honey are left behind. And, often this work has to be done 14 feet up in the air on a wobbly ladder. 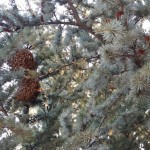 Bee removals are often requested during the hottest part of the year, so our beekeepers are in danger of heat exhaustion or heat stroke while they are suited up in their bee suits during the removal. Think of it as mowing your lawn in 100 degree weather wearing a winter sweater and sweatpants. 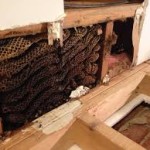 Unfortunately, the value of the bees that we retrieve is very low because their health is unknown. They might be loaded with parasites or very sick, and we might have to buy expensive medication to treat them. Many times after honeybees are removed, the entire colony will re-swarm, so it is not guaranteed that they will even produce any honey.

For those colonies that do stay, they will require approximately $100 worth of sugar and medication during the first year that they are establishing themselves in their new colony, and they will require beekeeping hive equipment worth $250 to put them into a new hive. So, the value of the bees is miniscule compared to the costs of giving the bees a new home, and the risk that we assume in spending money on new hive equipment for them, food, and medication for bees that might not even stay the whole season.

Our Bee Removal services are available in the following locations: 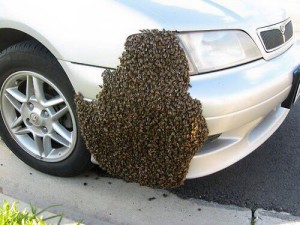 Information we’ll need from you in order to do the bee removal: 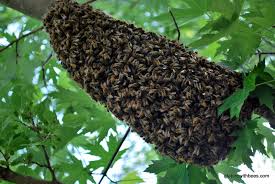 Bee Removals that we cannot do:

We would love to do bee removals for ALL swarm requests that come in, however, the safety of our beekeepers must be the top priority. If our beekeepers cannot reach the swarm without endangering themselves, or without getting into a situation where other critters might be sleeping (such as skunks, snakes, etc.), then the bees are better off being left alone until they move to a different location. 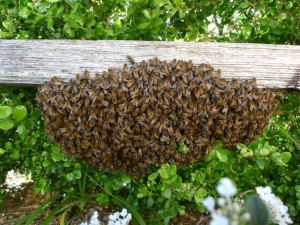 How Long Do Bee Swarms Stay in One Place?

– That’s a great question! Sometimes bee swarms only stay put for just a few minutes, and sometimes they’ll stay put for several hours. The earlier in the day it is, the more likely they won’t stay long. They will tend to use their daylight hours to scope out a new location. As it gets closer to late afternoon, the bee swarm will begin to look for someplace safe and dry to stay for the night. So, swarms noticed in the late afternoon won’t be as likely to change locations.

Why Do Bees Swarm?

– Another great question! Some bees swarm because their hive got too crowded, so the queen took half the hive with her to find a larger hive, leaving the remaining hive to requeen itself and continue growing. Other bees swarm because the queen is getting older and isn’t producing as many eggs daily as the worker bees would like, and the queen can sense that she is about to be replaced by another, younger, queen. When queen bees get replaced, the new queen or other workers will sting the old queen to death. I know! Not a pleasant way to go, is it? So, when an old queen senses that, she’ll swarm.

How Do You Know if a Bee Swarm is Dangerous? 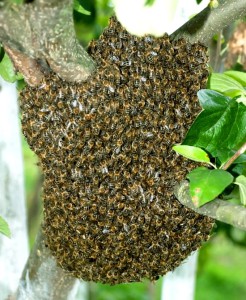 – You will know that you have a potentially dangerous situation on your hands if the bees are coming after anyone that is in the yard with them. If they are clustered up in a ball and not really flying around, leave them alone. They are probably just a hive of gentle, Italian bees looking for a new home. However; if the bees are coming after you, your family, pets, or livestock, it IS possible you have an Africanized bee swarm on your hands.

Please call a beekeeper immediately! Africanized bees are typically fumigated as we do not want these bees propagating in Oklahoma. We do have Africanized bees in Oklahoma in small numbers, but they are not extremely common YET.  They are dangerous and deadly. Currently, Africanized bees have not been spotted north of Ardmore or Ada because once they get much farther north, the climate is too cold for them in the winter. Africanized bees prefer hotter climates like in Texas, New Mexico, Florida, and Arizona, which is where the majority of African bees have been found. 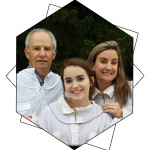 I'm Tonya Wells with Queen Bri's Honey! Together with my dad, Paul Leathers, and my daughter, Brianna, we are 3rd, 4th, and 5th generation beekeepers. We are very passionate about our little hobby! In fact, we are so passionate about educating others about honeybees, that in 2017 Keep Oklahoma Beautiful awarded Queen Bri's Honey their Environmental Excellence award out of all other nominated Oklahoma businesses! Our honey comes from our bee yards located in Oklahoma City and Moore, OK. Queen Bri's Honey is named after my daughter Brianna. We are part of the Made in Oklahoma (MIO) program and sell our 100% raw, unfiltered Oklahoma honey, and offer Beekeeping 101 classes one weekend a month from October thru April during the year. Our online Beginner Beekeeping class on Udemy is their #1 best-selling beekeeping class internationally, and currently we have students in over 28 countries. My daughter, Brianna, has taken our little hobby and opened up her own business called Fresh By Bri, where she uses the beeswax our honeybees make to create over 80 different bath and body products that she sells on http://www.freshbybri.com.

Want to help us out with the costs for our FREE bee swarm rescues? You can donate to help cover gas, new hive boxes, and feed for the rescued bees.

You may purchase our local honey by clicking on the “Buy Our Honey” menu option, and purchasing it through our online shop.